Born on 16 December 1895 as a small association with responsibility of managing fund of a local mosque, which would than be channeled to the local community through a very simple scheme, a small financial institution called De Poerwokertosche Hulp en Spaarbank der Inlandsche Hoffden started its long History from Purwokerto, Central Java, and became the pedigree of Bank Rakyat Indonesia.

As time passed, the small setup found by Raden Aria Wiriatmadja continued to flourish and meet the need of the community. In the course of its existence, its name was changed several times, beginning with the Hulp-en Spaarbank der Inlandsche Bestuurs Ambtenareen followed by De Poerwokertosche Hulp Spaar-en Landbouw Credietbank (Volksbank), Centrale Kas Voor Volkscredietwesen Algemene in 1912 and Algemene Volkscredietbank (AVB) in 1934. During the Japanese occupation, AVB was changed into Syomin Ginko.

After the Japanese defeat in the Second World War and Indonesia’s independence, the Indonesian Government once again changed the name to Bank Rakyat Indonesia (BRI) on February 22, 1946. Based on Government Regulation No. 1 of 1946, BRI became the first bank to be owned by the Government of the Republic of Indonesia.

As a state-owned bank, BRI played a key role in realizing the government’s vision in the development of people’s economy. In 1960, the government change BRI’s name into Bank Koperasi dan Nelayan (BKTN). Based on Law No.21 of 1968, the government renamed the bank BRI and it became a public bank. Later, based on Banking Law No.7 of 1992, BRI had its name and legal status of its entity changed to PT. Bank Rakyat Indonesia (Persero). With a focus on micro, small and medium businesses, BRI has inspired a lot of other organizations to empower the businesses in these sectors as they are the backbone of the Indonesian economy.

On November 10, 2003, BRI became a publicly listed company and the government divested 30% of its shares to the public. Since the Go Public, the price of BRI’s shares have always increased and are now included in the Blue Chips shares belonging to the LQ45 group. With the public controlling 43% of its shares, BRI’s shares are actively traded in the capital market. Today, BRI stands out as a strong bank in the midst of the Indonesian economy from the villages to the cities. 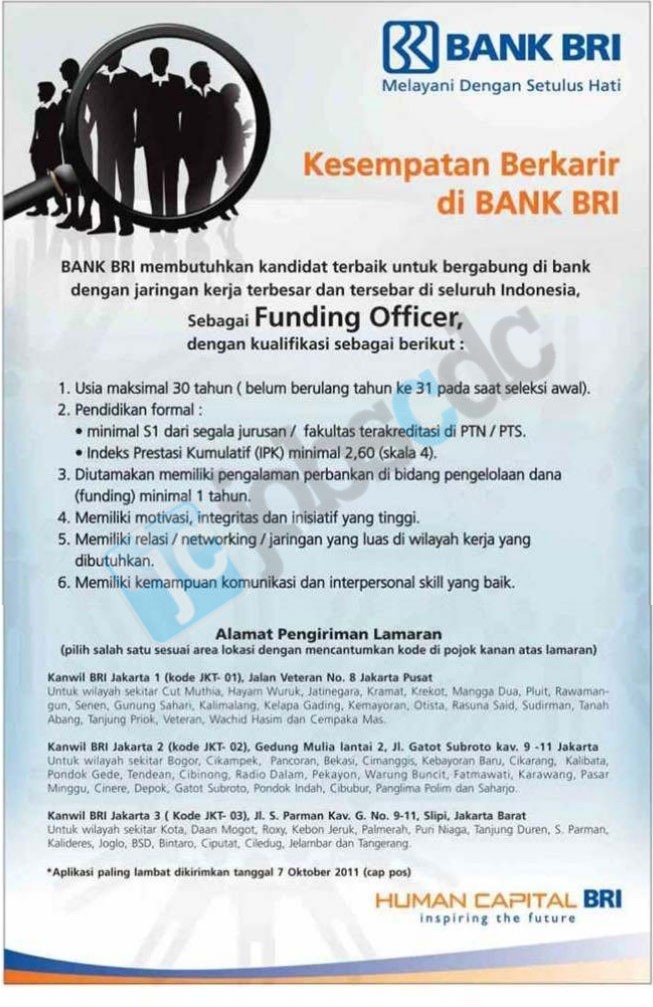 Only shortlisted candidates will be notified. Closing date 7 October 2011.